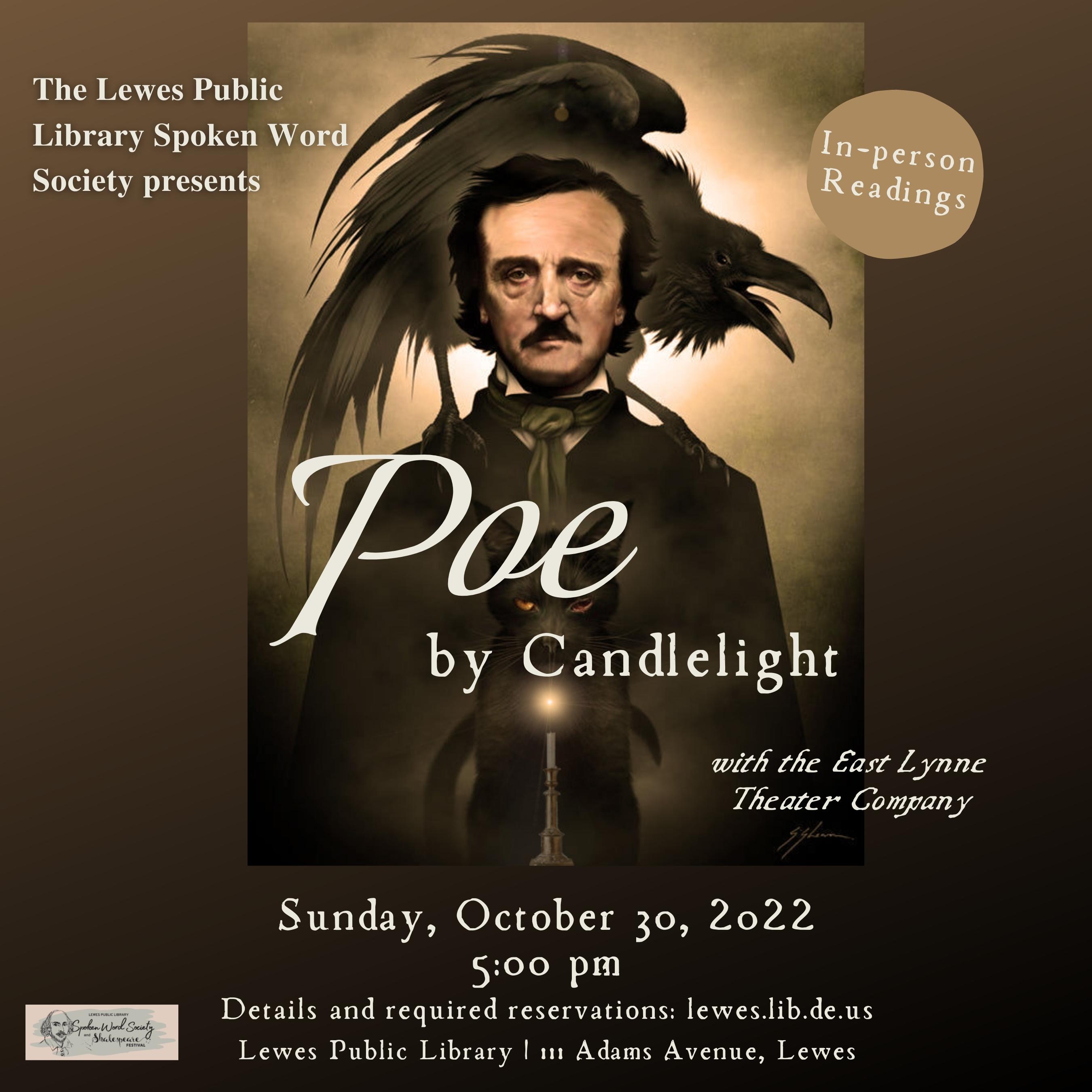 Since 2015, the award-winning Equity professional East Lynne Theater Company (ELTC) has been presenting what has become a yearly ritual for many: "Poe by Candlelight." Held on only one night annually near Halloween, it involves ELTC actors reading their favorite stories and poems penned by the master of the macabre Edgar Allan Poe. The Lewes Public Library Spoken Word Society now brings this remarkable piece to our community. This year, stories by the master of the macabre include "The Cask of Amontillado,” “Mask of the Red Death, and “The Tell-Tale Heart” read by professional actors Matt Baxter and Gayle Stahlhuth.

Matt Baxter’s ELTC credits include “Arsenic and Old Lace," and two world premieres, “The Legend of Sleepy Hollow,” based on the classic tale, and "A Year in the Trenches" about World War I. His NYC credits include "The Winter’s Tale," directed by Everett Quinton and "Chemistry of Love" at LaMama.  Regional credits include the two-hander "Dancing Lessons" at ARC Stages in Pleasantville, NY.

Gayle Stahlhuth has produced over 120 different productions since becoming ELTC’s producing artistic director in 1999, and directed most of them. She has also performed in Off-Broadway shows, national touring productions, and in regional theater and film. Her one-person shows are based on Louisa May Alcott, Edna Ferber, Catharine Beecher, “Eve’s Diary” based on the writings of Mark Twain, and “The Awakening” by Kate Chopin. Her two-person show based on Dorothea Lynde Dix, was commissioned by The National Portrait Gallery.

Since its founding in 1980, the East Lynne Theater Company, an award- winning Equity professional theater, has brought the American Spirit to the stage with its blend of provocative premieres and timeless classics, providing a portal to the past for a better understanding of the present. ELTC was the first theater in the country with the unique mission of presenting and preserving America's theatrical heritage, and is named after a popular 19th century American play.

The Lewes Spoken Word Society (LSWS) celebrates the tradition and artistry of oral storytelling through lectures, performances, discussions, demonstrations, and other publicly-shared experiences. The LSWS is partially funded by a grant from the Delaware Humanities, a state program of the National Endowment for the Humanities, and by a grant from the Delaware Division of the Arts, a state agency, in partnership with the National Endowment for the Arts. The Division promotes Delaware arts events on DelawareScene.com.