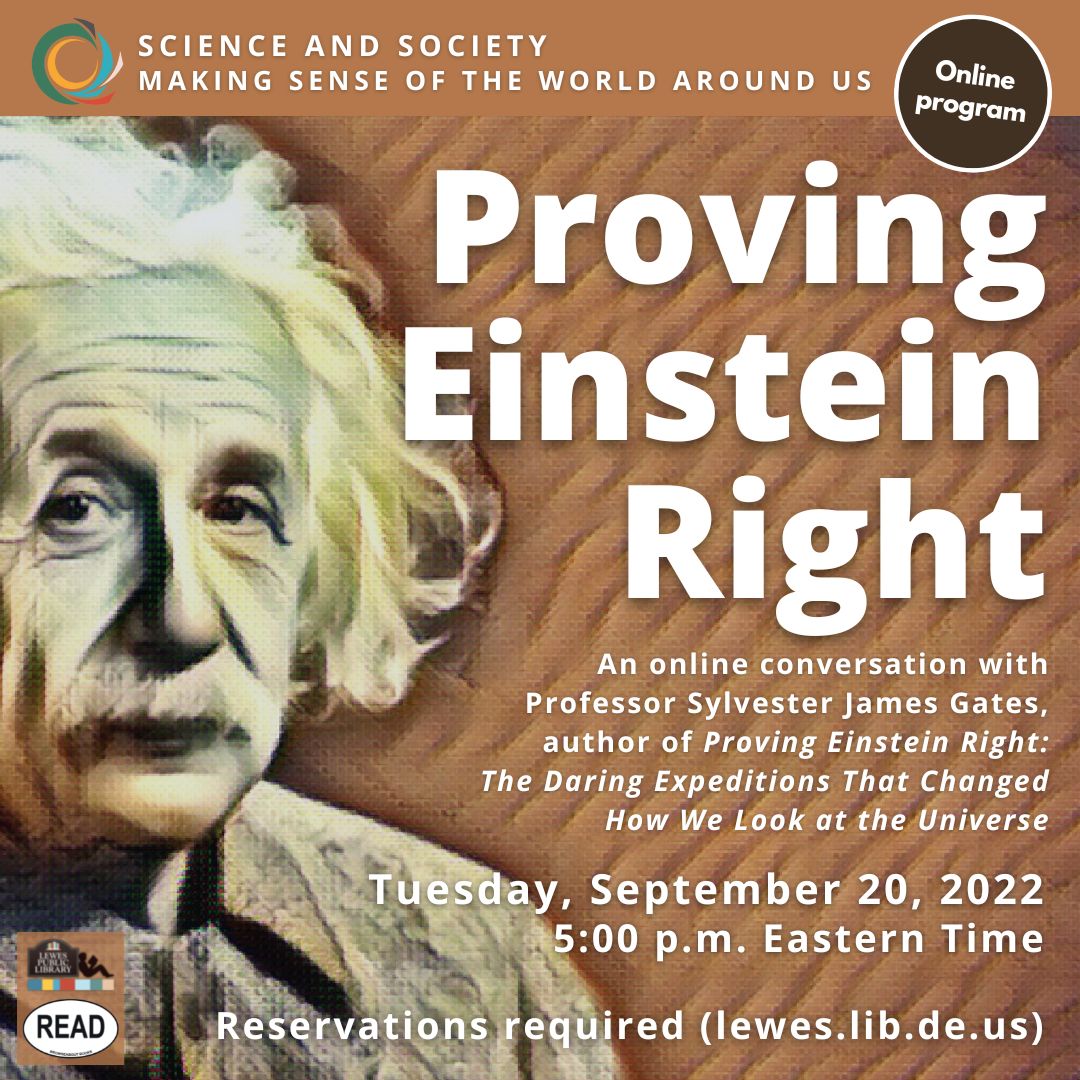 Join us online for a conversation with Professor Sylvester James Gates, author of Proving Einstein Right: The Daring Expeditions that Changed How We Look at the Universe.

In 1911, a nearly unknown German-born theoretical physicist named Albert Einstein had developed his theory of relativity but hadn't yet been able to prove it. The only way to do that was through the clear view and measurement of a solar eclipse. In May of 1919, one of the longest total solar eclipses of the 20th century was visible for almost seven minutes in the Southern Hemisphere. And so, two teams of intrepid astronomers set out on a treacherous journey-one to a remote town in Brazil, the other to the small African island of Principe. Their task was to answer the question: during the eclipse, would the stars' light waves follow Newton's law of gravitation, or Einstein's new theory of relativity?

In Proving Einstein Right Professor Jim Gates and his co-author, Cathie Pelletier, chronicle this decade-long mission. Hindered by everything from cloudy weather to world war, and travelling halfway around the globe, four men observed a solar eclipse that would catapult Albert Einstein to fame, set the framework for the Big Bang theory, and forever change the way we look at the universe.

Sylvester James "Jim" Gates, Jr. is a theoretical physicist who is most known for his work on supersymmetry, supergravity, and superstring theory. Gates likes to give popular-level lectures and makes frequent appearances in episodes of NOVA: Universe Revealed documentaries (among other appearances) including one on Black Holes that also features his daughter, a postdoc at Princeton who is a Black Holes researcher. He is a champion of STEM education and advocates for this topic in many venues.

In 2022 Gates was appointed as Clark Leadership Chair in Science in Department of Physics and School of Public Policy University of Maryland.  In 2013, he was awarded the National Medal of Science, the highest award in the United States given to scientists. He is former president of both the National Society of Black Physicists and the American Physical Society.

The conversation will be moderated by Colin Norman, the former News Editor at Science, and Fred Dylla, Executive Director Emeritus of the American Institute of Physics and author of Scientific Journeys. This event is part of the series Science and Society - Making Sense of the World Around Us, launched by the Lewes Public Library last year and co-organized by Fred Dylla and Linda Dylla.

We invite you to support the author by purchasing a copy of their book from Browseabout Books by clicking HERE. Call-in orders are accepted at (302) 226-2665 or you can stop by the store to purchase a copy. For store hours, please visit their website. Each copy purchased comes with a signed archival bookplate.