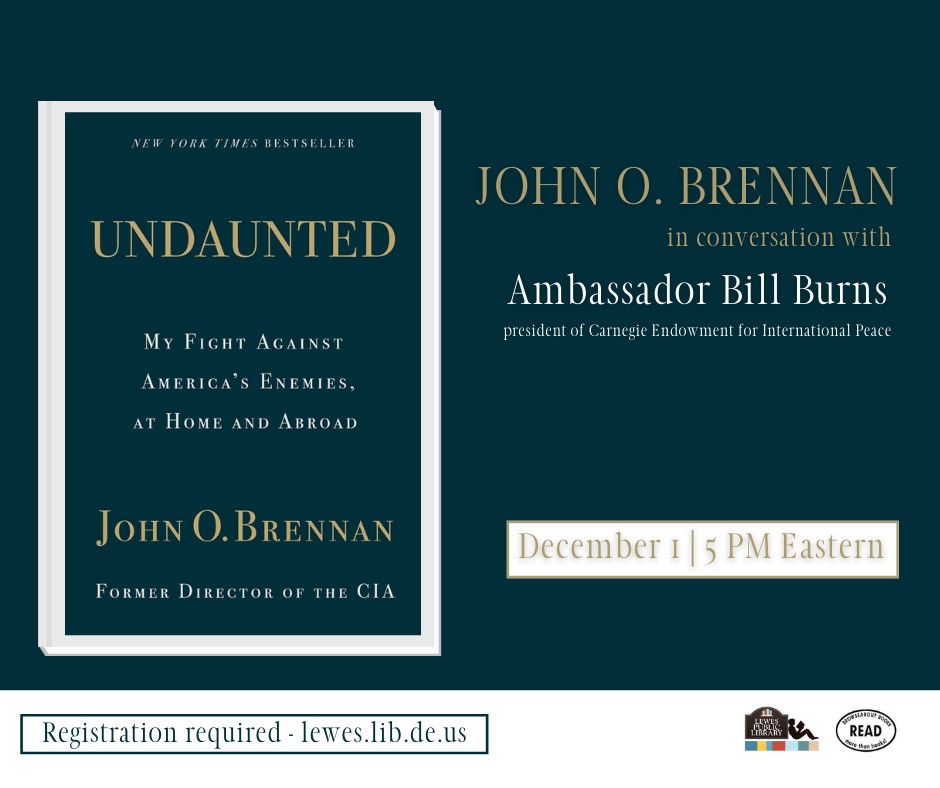 Join us for live, online conversation with former CIA director John Brennan, as he discusses his new memoir, Undaunted: My Fight Against America's Enemies, At Home and Abroad. Joining him in conversation is Ambassador William J. Burns, President of the Carnegie Endowment for International Peace.

In this brutally honest memoir, Brennan, the son of an Irish immigrant who settled in New Jersey, describes the life that took him from riding a motorcycle and wearing a diamond earring as a young CIA recruit enamored with spy work, to being the most powerful individual in American intelligence. He details his experiences serving under six presidential administrations, three Republicans and three Democrats, and what it’s been like to bear responsibility for some of the nation’s most crucial and polarizing national security decisions. Brennan pulls back the curtain on the inner workings of the Agency, describing the selfless, patriotic, and invisible work of the women and men involved in national security. Undaunted offers a rare and insightful look at the often-obscured world of national security, the intelligence profession, and Washington’s chaotic political environment. But more than that, it is a portrait of a man striving for integrity; for himself, for the CIA, and for his country.

John O. Brennan served as director of the Central Intelligence Agency from March 2013 until January 2017, where he was responsible for intelligence collection, analysis, covert action, counterintelligence, and liaison relationships with foreign intelligence services. From January 2009 to March 2013, Mr. Brennan was assistant to the president for homeland security and counterterrorism, shaping the U.S. Government’s counterterrorism strategy and coordinating Obama administration policies on homeland security, counterterrorism, cyberattacks, natural disasters, and pandemics. Mr. Brennan began his government service at the CIA, where he worked from 1980 to 2005 and specialized in Middle Eastern affairs and counterterrorism. He served as CIA’s intelligence briefer to President Clinton, Chief of Staff to then Director of Central Intelligence George Tenet, and Deputy Executive Director. In 2003, he led a multi-agency effort to establish what would become the National Counterterrorism Center, serving as the Center’s first Director in 2004. He retired from CIA in 2005 and worked in the private sector for three years. John Brennan graduated from Fordham University in 1977 with a bachelor’s degree in political science. He studied at the American University in Cairo in 1975-1976. He attended the University of Texas at Austin, earning a master’s degree in government with a concentration in Middle Eastern studies in 1980.

Ambassador William J. Burns is president of the Carnegie Endowment for International Peace and author of The Back Channel: A Memoir of American Diplomacy and the Case for its Renewal. He retired from the U.S. Foreign Service in 2014 after a thirty-three-year diplomatic career. He holds the highest rank in the Foreign Service, Career Ambassador, and is only the second serving career diplomat in history to become Deputy Secretary of State. Prior to his tenure as Deputy Secretary, Ambassador Burns served as Under Secretary of State for Political Affairs from 2008 to 2011, Ambassador to Russia from 2005 to 2008, Assistant Secretary of State for Near Eastern Affairs from 2001 to 2005, and Ambassador to Jordan from 1998 to 2001.

We invite you to support the authors by purchasing a copy of their book from Browseabout Books by clicking HERE for Undaunted and HERE for The Back Channel. Call-in orders are accepted or you can stop by the store to purchase a copy. For store hours, please visit their website. Each copy purchased comes with a signed archival bookplate.

NOTE: this meeting is being conducted through Zoom. You MUST REGISTER to receive instructions for joining the meeting. ONLY ONE (1) REGISTRATION PER HOUSEHOLD IS NECESSARY. If you plan to view the event with someone else, only ONE of you has to register. Please DO NOT register additional viewers as there is limited capacity in this webinar.