James Reston, Jr | "The Impeachment Diary: Eyewitness to the Removal of a President" 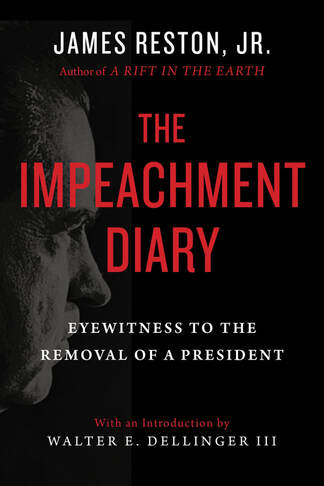 James Reston, Jr | "The Impeachment Diary: Eyewitness to the Removal of a President"

James Reston, Jr., took leave from teaching during the summer of 1973 to witness the Senate Watergate Committee hearings as he worked with his coauthor on what became the first full-length book to advocate for Richard Nixon's impeachment. During the following summer, he returned to Washington, DC, to witness the final act of the impeachment drama, attending the Watergate trials, Supreme Court deliberations over executive privilege, and House Judiciary Committee hearings to consider and eventually vote on articles of impeachment. In the exciting days after the smoking gun tape was revealed, Reston joined the throng of reporters at the White House, hungry for news of Nixon's response.

When he arrived in Washington, he decided to keep a diary. The Impeachment Diary is his contemporaneous account of those heady, uncertain times: when a president, having been investigated by a special counsel and Congress, was called to account for acts contrary to his oath and office, and fundamental questions about the Constitution were engaged. The diary offers lessons—both insights and cautions—for our own time. Former solicitor general of the United States and constitutional scholar Walter Dellinger has provided an introduction discussing the nature and meaning of impeachment and helping to draw the links between then and now.

Following the presentation, the author will sign copies of their book which will be available for sale by Browseabout Books.

Registration is requested. Sign up online, by calling the library at 302-645-2733, or stop by the Circulation Desk. Walk ins are welcome.