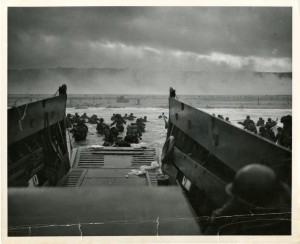 June 6, 1944: by the time Brigadier General Norm Cota came ashore on Omaha Beach, the American attack was faltering. Initial assault waves had suffered hundreds of casualties. Many GIs, seasick from hours in the landing craft, had lost their weapons in the fast-rising surf. Men were packed so tightly on the sand that German defenders on the bluffs above could hardly miss. Cota faced the ultimate test of a combat leader: get terrified men moving through a killing field to attack an entrenched and determined enemy.
Historian Ed Ruggero will share some insights into how Norm Cota and other D-Day leaders secured a critical foothold in France, thus beginning the long march to liberation for millions.

Registration is requested. Sign up online, by calling the library at 302-645-2733, or stopping by the Circulation Desk. Walk ins are welcome.