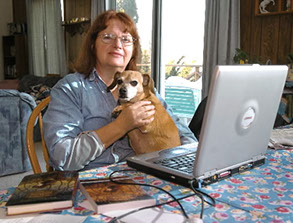 Nancy Springer, award-winning author of the Enola Holmes mystery series, will be our keynote speaker for the event which will also include various workshops geared towards aspiring writers. The full schedule of events, including a book signing by Nancy Springer, will be available after June 1. Space is limited; preregistration is encouraged.

Nancy Springer is a two-time recipient of the Edgar Award from the Mystery Writers of America for her Enola Holmes series, as well as a Nebula, a Hugo and a World Fantasy Award for short stories and has written more than 50 books over the past four decades. Her most recent novel, The Oddling Prince, was included in Publisher's Weekly's Top 10 list of Science Fiction/Fantasy/Horror books (Spring 2018). Ms. Springer's Enola Holmes series was recently optioned for a film starring Stranger Things actress Millie Bobbie Brown ("Eleven").

More detailed information on Authors & Audiences, including a tentative schedule, can be found here.